GST and other Financial Changes in Spetmenber 2021

Several changes are taking place in September, including Aadhaar-PAN connectivity, gas prices, and GSTR-1 filing. These new changes can have an impact on your daily activities. In this context, let’s take a look at some of the important changes coming up next month.

The GST Network has revealed that some changes will be made in the GSTR filing from September. Rule-59 (6) of the Central GST Rules states that certain restrictions will be imposed on GSTR-1 filing. Under the new rules, those who do not file a return on Form GSTR-3B during the previous tax period will not be allowed to file GSTR-1. Also, quarterly returns cannot be filed.

The RBI has been implementing the ‘Positivity Pay System’ since January. According to the new system, customers must inform the banks before issuing checks of higher value (more than Rs. 50,000). Otherwise those checks are likely to bounce. Already many banks have implemented this new system. The latest is Axis‌ Bank, which will implement it from September 1. The bank has already notified customers of the change via SMS. 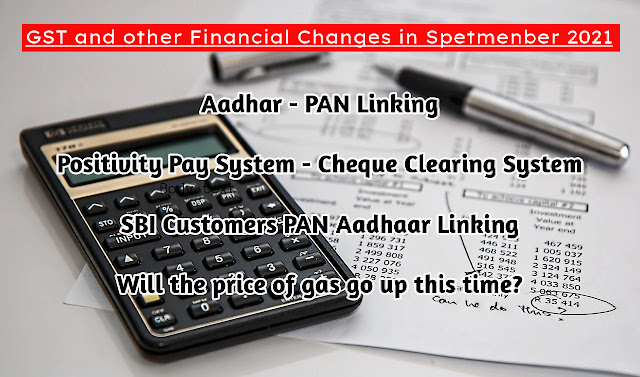 SBI has already asked all its customers to link Aadhaar-PAN. The deadline is September 30. Otherwise the benefits available through it, including the identification card, will be canceled. This can lead to the loss of information related to certain transactions. Also, Aadhaar-PAN connection is mandatory for depositing more than Rs 50,000 in a single day.

Will the price of gas go up this time?

Cooking gas prices have risen steadily over the past two months. The last time it was increased was on August 18 by Rs 25 per cylinder. It also rose by Rs 25.50 in July. In this context, experts believe that there are indications of a rise in gas prices in September as well. From January to date, the price per cylinder has risen by Rs 165.